The UI for the application is shown below. We have a button that requests a new photo from the remote camera. Once the photo is received, the image is processed and the recognition service labels are shown underneath. 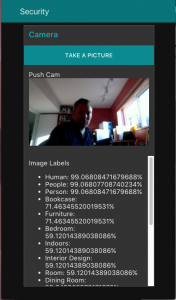 To do the image processing, we’ll set up a lambda function for processing images in an S3 bucket. This function will call AWS Rekognition for performing image recognition and labeling of the image. To return the labels back to Node-RED running in the FRED service, we’ll use AWS SQS. To do this, we will make use of these AWS services using the node-red-aws-contrib node.

The first remote security dashboard flow is shown below. 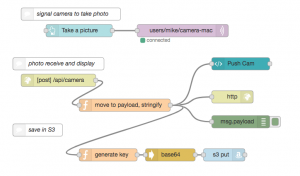 In this flow we use a dashboard ui button node called ‘Take a picture’ to trigger a message which is sent to a remote flow running on a Raspberry Pi via MQTT to take a photo as described in a previous tutorial. The Pi’s camera flow POSTs the image it takes to the /api/camera http endpoint shown.

We then move the image data in the http body to the message payload and stringify it for the template node to display it using the function node.

The message is then sent to a template ui node to display the image in the dashboard. The template node looks as follows:

The same message is sent to a function node where we generate the S3 key (filename) for the file to be stored in an S3 bucket:

The image payload is current base64 encoded. Before saving the image in S3, we decode it using the base64 node. We then use the S3 node from node-red-contrib-aws to save the image in a bucket.

The python code for our lambda function we used is here:

Once image recognition is done, we want to display the results in our application window. To do this, we have another flow as shown below:

In this flow, we use an inject node to poll for any new messages waiting in AWS SQS. The SQS receive node then sends the message to the function node to move the label data to the payload:

This JSON payload is then converted to a Javascript object and sent to the UI template node for display. The template to show the label list is simple:

We’ve added an SQS delete node to clean up messages from the queue once processed, and a catch node to view any errors that are thrown.

That does it.  Now, when we click on the Take a Picture button in our dashboard, we send a signal off to our remote Pi Zero to take a photo.  The photo is pushed into the cloud for display and image analysis on our Node-RED Dashboard.

To keep things brief, some of the details may have been glossed over in this tutorial, and of course there are many ways to extend it.  If you have any questions about this tutorial, want to get a copy of the JSON flows, or find any errors, feel free to contact us by email.